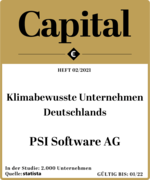 Berlin, February 16, 2021 - In a study conducted for the first time by the business magazine Capital together with the data portal Statista, the PSI Group was named one of Germany's climate-conscious companies in January 2021. The award, published in the Capital issue at the end of January, recognizes companies' commitment to reducing their greenhouse gas emissions. A total of 2,000 companies were evaluated, among which PSI was the only software company to achieve a top 10 ranking at number 8.

For the ranking, the emissions data of more than 2,000 companies with more than 500 employees and headquarters in Germany were analyzed. The question evaluated was which companies had reduced the intensity of their greenhouse gas emissions the most over the past five years. Only emissions data reported in accordance with the Greenhouse Gas Protocol's classification into scopes was taken into account.

For PSI, social responsibility and sustainability in customer projects and in own processes have been of particular importance since the company was founded in 1969. PSI supports the sustainable development goals of the United Nations and contributes significantly to the careful and sustainable use of energy, raw materials and labor in the energy, production and transport sectors with advanced software products. Since 2011, PSI has reported emissions data to the Carbon Disclosure Project (CDP) and consistently pursues the goal of avoiding CO2 emissions and supporting customers in achieving their emission targets.

To the complete Capital article (available in German only): www.capital.de/klimabewusste-unternehmen-2021

Based on its own software products, PSI Group develops and integrates complete solutions for optimizing the  flow of energy and materials for utilities (energy networks, energy trading, public transport) and industry (metals production, automotive, mechanical engineering, logistics). PSI was founded in 1969 and employs more than 2,000 people worldwide.